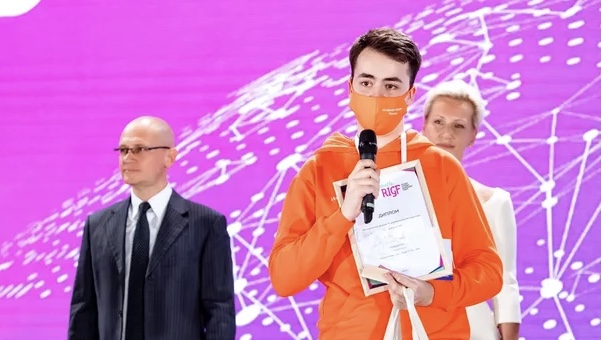 Interview with the Winner of the "Best Youth IT Startup"

Project «FreeLunch», developed by Ilya Katkov, a 4th-year student of the Belgorod Industrial College, took first place in the Best Youth IT Startup nomination, which was awarded at Youth RIGF.

«FreeLunch» (https://фриланч.рф/) is a system for aggregation of food requests, which is a set of software tools (web services, iOS and Android applications) for remote application for free hot meals in secondary professional educational institutions and can also be implemented in schools and universities throughout Russia.

— Ilya, what tasks did the project face?

— Basically, this is a solution to the problems of organizing free meals that exist at the moment. First, it simplifies the process itself, which takes about 3 hours: student requests for lunch are usually collected manually, and the data transfer chain to the final destination is too long. Secondly, there is always an error in the applications. For example, interns are usually not counted in the manual collection of food applications. And the number of those who signed up for lunch rarely coincides with those who actually came to it, which is why the regional budget suffers.

— How does this program work?

— The collection of applications for meals is carried out by personal confirmation of each student in the web service (https://bincol.ru/freelunch/ and https://belpedcol.freelunch.rf/) or in the application by entering a student ID and a unique PIN-code. Applications are available to administrators of the control panel (curators, department heads, canteen managers). The daily statement is generated automatically and downloaded in Word. A student who is sick or doing an internship at the enterprise can also sign up for lunch any day. The process itself takes less than a minute. We are also working to ensure that the student can view the lunch menu for the week ahead.

— At what stage is the project now? Where is it already implemented?

— The food system is currently operational in the Belgorod Industrial College, a demo version for one educational department, consisting of 11 groups already functions. In Belgorod, the FreeLunch consists of 1000+ users. In the near future, it is planned to introduce this system to the Moscow Polytechnic College. The project was also repeatedly mentioned in the Belgorod media and supported by regional officials. Among the latest achievements is, of course, a victory at Youth RIGF.

— How do you see the future of FreeLunch?

—  My first goal is to implement the project throughout the Belgorod region and then to other regions of Russia. And, of course, I dream of tens of thousands of downloads on Google Play and AppStore.

— Who else is on the development team?

— We have a team of developers who are working on their first commercial project and, most importantly, are passionate about this idea. I am from Belgorod, but the guys involved in the project are from different parts of the CIS: Android developer from St. Petersburg Dmitry Sokolov, designer from Podolsk Ivan Bazilevich, iOS developer from Minsk Ivan Dubinka. Our friendly team, however, lacks an account manager who is equally passionate about the idea. Hopefully, we will expand over time.

— You are a frontend and backend developer and study programming. Why did you make that choice?

— Since childhood I have been fond of IT, since the first grade I already knew how to reinstall Windows and developed the first games, and by the age of 14, I launched my first website. My main dream was to create an application that will be used by at least a thousand real users. A dream came true after I was asked by the college to automate the process of aggregating food requests.

— What advice would you give to those who are also trying to invent something?

— To begin with: don't listen to those who don't believe in you and your project. Even if the first pancake turns out to be lumpy, you will still gain experience in management, development and communication. Chase your goal, but don’t place high hopes on quick success.

Don’t give up. If everything goes not as you like, then this is an occasion to rethink the approach. Don't be afraid to raise stakes.  Well, and, of course, don't forget about rest.